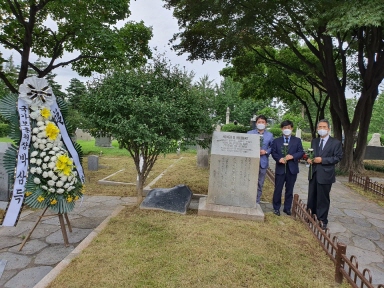 Kim Dong-jin, right, chairman of the Hulbert Memorial Society, holds a flower during an event held in Seoul, Monday, to commemorate the 71st anniversary of the death of Homer Hulbert (1863-1949), an American educator who helped Korea's independence movement. He was also an advocate for the Korean language and died in Korea in 1949. Next to Kim are Ministry of Patriots and Veterans Affairs Seoul regional office head Lee Seong-choon, center, and Nam Jong-woon from Mapo-gu Office. / Courtesy of Hulbert Memorial Society

'History of Hangeul should be rewritten' 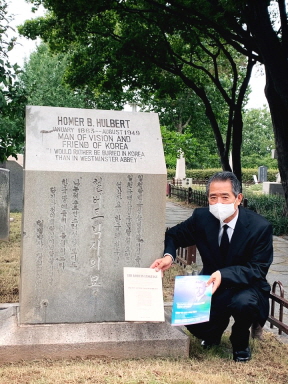 Kim Dong-jin, chairman of the Hulbert Memorial Society, a non-profit organization commemorating Homer Hulbert (1867-1949), disclosed  the original copy of a 1889 New-York Tribune article written by the influential educator about Hangeul, the Korean alphabet, on Monday.

Born in the U.S., Hulbert first came to Korea as a teacher at the Royal College in 1886. He stayed in Korea until 1907 when he was expelled for criticizing Japan's increasing control over the country, and was invited back in 1949 shortly before his death. He is best remembered as an educator and for his support of Korea's independence movement. In 1950, the Korean government awarded him the Order of the Taegeuk posthumously.

“Hulbert did many things to promote Hangeul during his stay. The article in the New-York Tribune proves that he promoted the Korean alphabet not only inside but outside Korea, and opened the opportunity for Hangeul to become popular in Korea. The society is disclosing the copy to make people know about who Hulbert is and what he did for Hangeul,” Kim told The Korea Times, Tuesday. “Hangeul's history should be rewritten taking his contribution into account.”

Hulbert also authored “Saminpilji,” a geography textbook written in Hangeul, in 1891, and several years later, became a contributor to the first Hangeul newspaper, the Tongnip Sinmun.

Created in 1443 by King Sejong, Hangeul was considered inferior to Hanja, the Chinese written system, until the 20th century. Hulbert recalled when he arrived in Korea in 1886, he didn't see any people using Hangeul and that people looked down on it.

Hulbert's article in the New-York Tribune in 1889

According to the article, titled “The Korean Language”: “The Korean alphabet has not its equal for simplicity in the construction of its letters. The vowels are, with one exception, made either by a short horizontal line, or a perpendicular one, or a union of the two. Thus 'ㅏ' represents the broad sound of a, ㅗ the broad sound of o, ㅣ the continental sound of i, ㅜ the sound of u. These can all be instantaneously distinguished and all the endless difficulty in regard to illegible writing is avoided.”

Kim, who spent decades collecting Hulbert memorabilia, obtained the copy from his grandson.

The original article was republished in a small book that also carried a Korean translation and opinions by Hangeul experts.

“Hulbert is the second father of Hangeul. Ju was a great researcher and an advocate, but Hulbert paid attention to Hangeul and wrote about Hangeul's value before Ju. Hulbert was the first person to use Hangeul and advocate for it after King Sejong…. The history of the Korean language should be rewritten.” 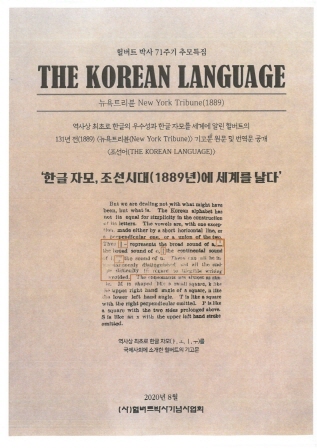